Talking about kayak fishing beginings in Spain means talking about Peskama. It is a web site where y 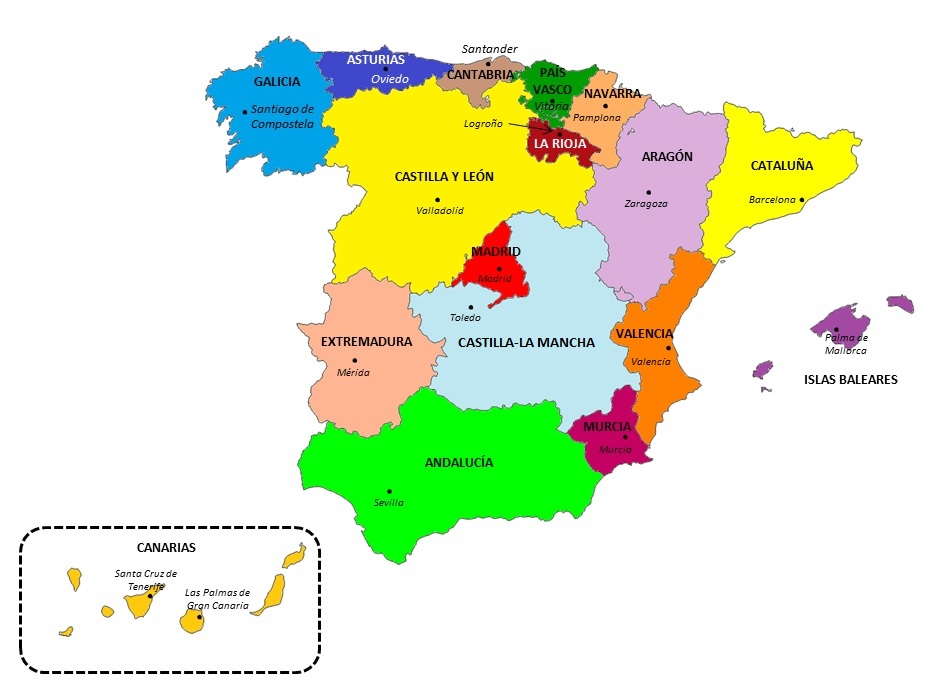 ou can find plenty of information about kayak fishing in Spanish Languaje; rules, equipement, safety, tips, fishing journals, kayaks reviews, etc.
It also has a discusion forum where the kayak anglers pioneers answered all doubts to the newbees. The activity was very high and they started to organize kayak fishing meetings all around Spain with an awesome audience but after 2012, we can’t explain why, the activity in the page started to fall and nowadays is stopped.

Before continuing the history we have to teach you a little of geogrphy to let you know about the Spanish Regional Administration Districts (Comunidades Autonomas). Spain has 17 different regions and 2 autonomus

cities (in the north of Africa), each one with his own fishing rules. Kayak fishing is allowed in most of them but unfortunately in Asturias (dark blue color in north of the peninsula) it is forbiden. You also should know that the yellow islands in the south of the map are the Canary Island, and they are located in the Atlantic Ocean about 1000Km away from the peninsula in front of Marocco. Sorry for the lesson but you need to know this to continue.

After 2012 people started to create Kayak Fishing Sports club all around Spain. That means that each region may has several differents clubs. We do apologize if we forget to add some clubs but this is a graphical representation of most of them by region.

C.D. Vivo Kayak Almería wich began its activity in june 2015 is one of those clubs. So it might be a theory that through Peskama site people started to meet kayak fishing anglers near them and they started to create kayak fishing clubs in their cities.

As we told you Spain do not have a kayak fishing law to be applied in all the Spanish territory. So to legaly practice kayak fishing in Spain you just need an administrative license (provided by the regional goberment where you live). It doesent mean that you’ll have to pay another license if you want to fish in other regions, it is possible to fish in all regions except Asturias, where incomprehensively it is forbiden.

In Spain Sport Fishing Competition is ruled by the Spanish Fishing Federation (FEP), and also each region has its own regional fishing federation. There is a kayak fishing competition circuit in Spain organized by those federations but this is something we will continue telling you in Spain Kayak Fishing History (part 2).

Any cookies that may not be particularly necessary for the website to function and is used specifically to collect user personal data via analytics, ads, other embedded contents are termed as non-necessary cookies. It is mandatory to procure user consent prior to running these cookies on your website.